That lived mainly people of German nationality, caused by the Czech King Premysl Otakar II., Which the Germans colonized in the 13th century among others Trutnovsko county.

The actual settlement of the future of the village began sometime in the early 14th century. Sometimes in these times created two huts, the upper (later called Upper Court) at the confluence of the V and goose creek and lower (later called Dolní Dvůr) at the confluence of the V and Kotelského stream. Do these sheepfolds to cast out the summer mansion cattle. Furthermore, there was built a sawmill, and the iron works were built as cottages for shepherds, melter, Pilar and woodcutters. These were the first beginnings of the village - yet unnamed.

After the war, the industrial village gradually becoming a popular tourist center with the fact that many cottagers, businesses and organizations took the opportunity some buildings and houses to buy in order to rebuild the houses and corporate chalets. It was the basis for the present form the Lower Court, where we find a lot of new buildings outside the original log cabins, cottages and guest houses.

Enjoy the true taste of our local cuisine as we use quality ingredients only. Or try our italian restaurant with our new pizza oven! 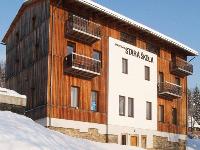 The apartments were reconstructed from the old school to a modern accommodational facility with the two luxury and the three superstandard apartments including of the one hotel room. 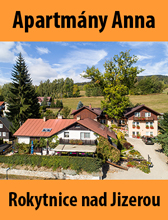